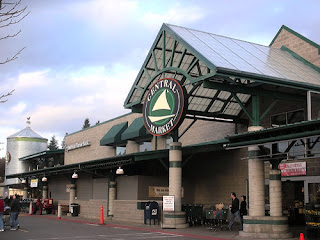 Every day at 5 am, a volunteer from Fishline eagerly travels to Central Market.  Awaiting him/her are boxes of produce that are being “rescued” from Central, the results of the fastidious standards Central has for all its food.  If a red pepper has a mark or a tomato a soft spot, it must be removed so that retail customers can be assured of only the highest quality products.  These “imperfect” items are still very edible and end up as the “perfect” stock in our Front Market. 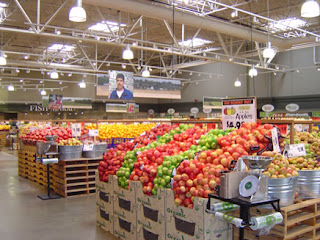 As if that’s not enough, we go back for a second run every day, picking up dairy, bread, cakes, pies, meat and other food items.   These two runs bring in hundreds, sometimes thousands, of pounds every day for our neighbors.  This adds up to an astonishing total every year.  In 2011, Central donated over 300,000 pounds of food to Fishline.  That’s about 60% of our grocery rescue totals.

Additionally, Central helps out throughout the year in other ways.  When we had our Empty Bowl Fundraiser event, where we served soup to guests, Central provided the soup at their cost.  When we wanted to sell our Poulsbo Tote Bags as a fundraising project, Central located them at the checkout counter so they can be seen by all their customers.  And, in the middle of the year, Tom Hall, General Manager of Central, presented Fishline with a substantial monetary donation.
Fishline can ask for no better partner in its mission to end hunger in North Kitsap.

For 20 years, the Letter Carriers Union has set aside a day each year when they will pick up food donations for area food banks, making possible the largest food drive in the world. Traditionally, this has provided a huge influx of food for Fishline, sometimes more than 20,000 pounds. This year, the numbers were a little smaller, 14,500 pounds collected, but this is still a serious amount of food. Boxes of canned soup, boxed meal dinners, peanut butter and treats, needed this time of year more than any other.

Over 100 volunteers came together to help pull off this gigantic effort, including 17 driver teams which followed established postal routes and collected hundreds of white bags, to large groups of other volunteers who worked at the Post Office dock making sure all the items were sorted and packed in boxes that were then loaded into a waiting semi. Volunteers from the Marines, the Navy, local churches and schools, and area businesses like Zero Gravity became instant friends as they moved with precision and endurance throughout the day.

The Poulsbo Post Office does a great job organizing and executing this massive food drive. Carriers stay longer than usual, picking up hundreds of pounds of food – they seemed so excited when they could see all the food that would be available to those who need it. It truly is a community effort of “neighbors helping neighbors”.

With 16 percent of Americans at risk of hunger each day, members of the National Association of Letter Carriers hope their annual “Stamp Out Hunger” food drive will help lower the number of individuals who face malnutrition in the United States.
May 12 will mark the event’s 20th anniversary.
Brooks Bennett, a letter carrier in Bothell, has participated in the food drive since its inception. He said mail carriers have a charitable history because the nature of their work connects them with communities.
“We know that people need help from time to time and this is an easy thing for us to do,” Bennett said.  “It’s one day of intense involvement and additional labor, but the feedback we get from people who benefit from the food and customers who provide food is very appreciative. And appreciation goes a long way in a volunteer effort.”
According to the Stamp Out Hunger website, the drive is the nation’s largest one-day food collection occasion. It began in 1982 and grew nationwide in 1992. Each year, letter carriers from Poulsbo, Washington to Portland, Maine collect donations that help stock local food banks for spring and summer.Last year, letter carriers across the nation collected 70.2 million pounds of food, the website stated.
Rick Horner, former president of association Branch 79 in Seattle, has participated in the drive since its start. According to Horner, the U.S. Postal Service plays a large role by providing donation bags and postage for reminder cards. He credits the food drive’s success to its many partners and the event’s consistency.
“It is at the same time each year,” Horner wrote. “It is also relatively easy to put a bag out in the morning and have your letter carrier pick it up.”
In North Kitsap, the food drive will benefit North Kitsap Fishline, ShareNet and Kingston Food Bank.
Read original post from the North Kitsap Herald.

Fishline will offer its donation station again this year at Poulsbo Village, in front of Albertsons.
The Fishline van will be there Saturdays, 11 a.m. to 1 p.m., May through October.  Bring your food and thrift items and receive a coupon for 20 percent off any item at Second Season Thrift Store in Poulsbo.
Follow us on Facebook  Follow us on Twitter

Support Fishline by dropping off food donations in our collection barrels at any of the following locations:

Need after hours or emergency services?

Dial 2-1-1 to get connected with Washington Information Network, a statewide call center network that can connect you to the immediate health & human services help that you need.